There are many advantages that small businesses 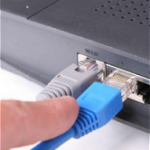 can take advantage of when they choose to network
their computers. By networking computers, a small
business can increase their efficiency and share
resources between computers, something which
can really optimize performance. Networking also
helps to reduce the cost of equipment since it allows
more than one computer to share certain resources
such as printers.

Networking then and now

In the past, setting up a computer network for a business was a complex task. You needed to know how to set up and wire equipment in order for the network to function properly. That has changed significantly. Wireless networks can now be used to join computers together and allow them to access shared resources from printers and peripherals to files and software.

There are still networks which use Ethernet cables to link computers together. There are some very good reasons why some businesses tend to stick with Ethernet connections rather than using a wireless network. The speed of Ethernet networks is often faster than those of wireless networks. As well, there is less of a chance that the connection will be dropped. If you need a network that is not dependent on a broadcast signal you may still want to consider an Ethernet network.

You need to determine whether or not a wireless network is right for you. If you have decided that it is, you will need a device capable of broadcasting a signal to more than one computer at a time. There are many wireless networking modems or routers that can do just that. They can be set up in a corner of the office and will broadcast a signal to all of the computers in the building.

Setting up an Ethernet network is slightly different. You will need to run wires in order to connect the different computers as well as running lines to connect them to any devices that they will be utilizing. In many cases, it can be helpful for you to have a professional run the lines and ensure that your network is functioning properly.

Taking the time to set up a network correctly can significantly improve your company’s performance. Once it has been set up you may never want to go back to separate computers again.