Computer networking ain’t what it used to be. For starters, 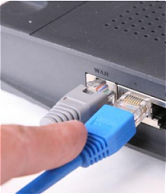 it’s no longer a luxury item for many
small businesses. It’s become a necessity.
But that doesn’t mean it’s out of your reach.

To develop the Eye, the 16 strong staff used an
internal network to share files and printers and to
collaborate on such things as 3 D Modelling.

And, they used an ISDN connection to the Internet to
communicate with suppliers worldwide. This allowed
more than 1,000 drawings to be pushed around
the world in the time it would take to pick up a phone to book a courier.

There was a constant to-ing and fro-ing of documents, drawings, contracts and emails via the
Internet during the construction of the Eye. The firm also had video conferencing between London
and Japan and a Web cam set up so that any of the contractors could actually see the construction
in real time at any stage of the process.

By networking their computers and connecting the Network to the Internet,
Marks Barfield cut out the old paper trail – printing, photocopying and distributing
documents by snail mail. The network proved essential to a time critical project such as the Eye.

But for small businesses, networking used to be a scary word.
Shrouded in arcane acronyms, the cost and complexity used to
frighten off all but the most adventurous small firms.

Certainly not for beginners. Now costs have plummeted
and ‘plug and play’ devices simplify installation.

Any network novice or beginner who is handy with a screwdriver and confident with
configuring a computer can use the networking Wizards to be found in all flavors of Windows
these days to set up a perfectly adequate small network to share files, an Internet connection
and devices such as printers and scanners.

If you just want to get three or four computers to talk to each other via a bog standard network
(otherwise known as ‘peer to peer’), all you basically need is some cable and slot in network
cards for your PCs and a hub (a device which helps you manage network traffic and keeps
the system going if one part of the network crashes). Hubs can be bought for under €60.
I remember when they cost upwards of €1,200!

You can even buy off-the-shelf kits nowadays by mail order or from your local
computer store. Prices start at under €200.

The cheap and cheerful ‘peer to peer’ Network will handle file and print sharing for up to five or six computers.
But there are drawbacks. It can be difficult to backup and manage files on a system where everyone
has to store everything – software and data files – locally on their desktop machines.
As it grows, the network can become unstable and sluggish. And vanilla flavored,
out-of-the- box networks are generally poorly supported.

As a beginner, you may just want to dip your toe in the water, and start off with peer to peer.
But as you grow you will want more people to get more from your network and this requires the
more expensive – but far more versatile – ‘client/server’ set-up.

These networks are built around powerful computers (which in a small business could just be another PC with a lot of grunt) called ‘servers’ which basically store and ‘serve up’ all the information and software applications (accounting, word processing, databases etc) to the desktop machines scattered around your offices on demand.

Of course, if the server goes down your business could suffer, so you are going to need a contingency plan (perhaps a second back-up server) and a fast-response service agreement from a reliable contractor.

Once you set-up a network all kinds of productivity benefits and cost saving applications are possible. Another sea-change in networking is the way practically any device can be made to talk to anything else. You don’t need the equivalent of the mission control centre at Huston to integrate your telephone systems with your computer network anymore.

Now, there are small business systems which do whizzy things such as automatically call up customer details when they dial in and let email and voicemail share the same “mailbox.” A “unified messaging” system, for instance, will let you receive and forward emails, fax messages and voicemail from your handsets (including mobiles) to your PC. Just click and you can listen to your voicemail from your desktop computer.

But if all this isn’t enough, there now comes the prospect of totally wireless networks with all kinds of devices talking to each other without a cable in sight. 3Com’s AirConnect Starter pack, for instance, is aimed at small businesses and costs under £1,000. Linking three laptops (PC cards are an optional extra), it enables you to access your Internet link, print from your printer and save files on your desktop PC without any messy cable installations whatsoever. Try online electronics store Dabs for good deals.

If your head is spinning, try the excellent introductory guides to network options (including cabling your office, unified messaging and wireless networks) for small businesses at the 3Com Learning Center. For more in-depth – and techy stuff – and unbiased product reviews try About.com, ZDNet, C/Net.and VNUnet.