Photovoltaic or PV systems are devices used to convert sunlight into electricity. Photovoltaic systems are a safe, reliable, low-maintenance source of solar electricity. They have a life expectancy exceeding 40 years. They produce no pollution or emissions, incur few operating costs, and are easy to install. With rising energy costs the demand for PV systems is increasing. 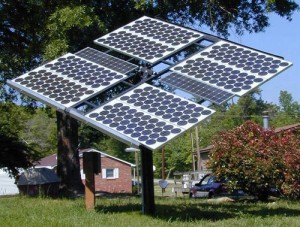 PVs can be used effectively in most homes, alone or in combination with other systems. PVs are ideal for homes which are located some distance away from grid. However, PV systems are being increasingly used to provide electricity for homes that are connected to utility power. Internationally, utility grid-connected PV systems represent the majority of installations, growing at a rate of over 30 per cent annually.

The basic building block of a solar-energy generating system is called the solar cell built into a PV module. PV modules are connected together into panels and arrays to meet various energy needs.

Modules used for home power applications are between 75 to 120 watts. Based on current module efficiencies, one square meter of solar modules generates about 130 watts in bright sunshine.

Off-grid does not always mean being a long distance from grid. Many homeowners already use solar-powered outdoor lighting. These solar lights are miniature versions of PV systems that power off-grid or autonomous homes. In this type of system, the solar modules charge a battery, which in turn operates the electrical loads. Another type of off-grid PV system directly connects the solar module to an electrical load. Examples of this type of system include attic-ventilation fans, and agricultural and livestock water pumps.

Off-grid homes rely on batteries to store the solar electricity for nighttime use and during periods of cloudy weather. In this type of application, the size of the solar array and the capacity of the battery bank are carefully sized to give optimum performance.

For homes that are off-grid, appliances that use a lot of electricity are usually taken off the PV system. House heating usually includes a combination of wood, propane and passive solar housing design, while water heating is often accomplished by using a combination of propane and solar domestic hot water heaters.

The most popular type of grid-connected solar power is the synchronous system. The solar array is connected to a synchronous inverter that blends the PV generated electricity with grid power, after which the combined electricity is fed into the house to run the domestic energy loads. When the solar array generates more power than is required, the excess is fed out into the grid where other utility customers use this solar-generated electricity. The inverter in this system is very different from the one in the offgrid system and must meet stringent utility guidelines.

The disadvantage of this system is that the inverter also shuts down in case of power failure, for example during a lightning or ice storm. Thus, the PV system cannot provide electricity if the power goes out. This is a utility safety requirement to protect utility service employees that may be working on the power lines.

The first step in evaluating the potential of solar electricity for your home is a site assessment. PV modules are extremely sensitive to shading. Ten per cent shading of a module can reduce power output by 100 per cent. Generally, a good site will be free from shade from 9 a.m. through to 3 p.m. In most cases, the ideal location for a solar array is on the roof of the house. This prevents shading concerns, and its large, flat surface makes mounting relatively easy. It also can reduce snow buildup in front of the modules.

While considering solar systems it is necessary to estimate the home’s power and energy needs. This is a critical step for off-grid applications, as the homeowner will be relying on the solar system to provide all or most of the electricity. This step is less important for grid-connected systems as solar is being used to replace or supplement an existing source — the sizing in this case is often based on how large a system the homeowner can afford.

A PV system should be designed for maximum efficiency and cost-effectiveness. It is necessary to consult a PV professional at the design stage.

It should be noted that PV systems are modular and can be expanded as energy needs grow or as budget allows.

PV components do not have moving part and this makes maintenance costs relatively low.   Solar modules have life expectancies exceeding 40 years. The majority of the other electronic components, such as controls and inverters, will generally last ten or more years if their ratings are not exceeded. Batteries, which are required for most off-grid applications, are the weak link in the PV system. They will typically need replacement every five to ten years.