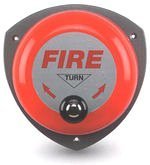 found in modern buildings and homes.

Items that you will need to check during a fire alarm inspection.

1. A fire alarm inspection will make sure that there are no objects
blocking the fire exits; and that the doors can be easily opened.
The signs pointing to the fire exits should be made clear and conspicuous
enough — which will allow people to spot them even during a state of panic.

2. When you undergo a fire alarm inspection, the number of exits out of the building will be
checked to make sure that they are enough in ratio to the number of occupants.
It is important to verify that the building does not exceed its maximum occupancy level.
If there are too many occupants and people in the building, with not enough exits,
it could lead to stampedes in the event of a fire.

3. It is important not to store any highly flammable substances in the vicinity of the building.
However, if they are absolutely required, the flammable materials should be kept and stored properly.
It is highly recommended to put them away from high-risk areas.

5. Sprinklers should be placed in areas that have a higher-risk of fire. The distance between
the sprinklers should also be properly calculated so that there won’t be any overlap.

6. Fire drill is often considered as a useless practice; when it is in fact very valuable to
instruct people in the building on where to go and what to do — in the event of an actual fire.
Fire drills, as part of the fire alarm inspection, should be done at least a couple of times every year.

Fire Alarm Inspection – Items that need to be checked